TGIF! (oo oo are they hiring?)

Every damn place I go. I’m kinda over it.. but at the same time.. it’s given me an excuse to get out of the house more often and I’m not dealing with drama. I took about 300 pictures or so over the past couple of outtings. I feel like a virgin experiencing some of this for the first time. To think, I used to be so afraid of solitude. Now I can’t get enough.

Didn’t hear about the prime job. Had that pre-interview early today. Decided to skip sleep… still haven’t made it to bed yet. I’m exhausted but there’s too much to do.  So, with that said, pardon if this blog isn’t perfectly worded.  I am half asleep but refuse to go to bed without doing my blog for the day.  Committed. Addict.  No relation.

I was thinking I might clean when I got home. I vegged about 45 mins or so. Then glanced at the clock. It was 645 and I’d asked dad about doing something with Ethan tonight at 7. Where was he? Why hadn’t I heard anything from him?

I called him. My son answered. He was on the way to a cousins.

I did something I hate doing. I had my son be the middle man to ask dad what happened. Dad forgot. I’d just changed out of the get a job threads into my robe. Dad held to what he said and cancelled on the cousin. So we went to the story hour and then grabbed something to eat in the mall and took pictures in a photo booth.
Ethan loved it. I’m going to try and do it more often if/when I can.  It was something very special.  It’s wonderful.  My son is the best thing in the world.
There’s a set of pictures from that on my flickr here: 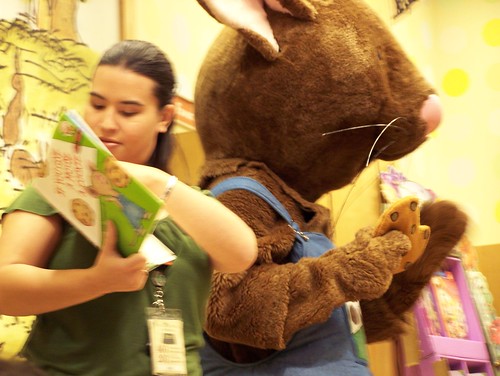 Yesterday was a bit aggravating.  My roommate wants to turn our storage area/dining room into another living room.  I think it’s stupid because we have pretty decent sized living room.  If things were rearranged or something, it would look and feel better.

I think I explained that I clean up after her.  I try not to.  I try to do subtle hints but either she doesn’t get them, or doesn’t care.  She’s not a bad person.. but, well, there was a broken glass on the counter for 3 days before I finally moved it.  This was when the kids were here.  Honestly where it was, the kids couldn’t reach, but still.  It takes how much effort to throw it way, and possibly take out your own trash?  Yeah.. exactly.

I ask her to clean her mess for weeks.  It goes on but she does nothing and I end up doing it.  However if she wants something, she gets on my case if I break the habbit of being my clean self.  It’s bs.  Having been out and about looking for stuff, I really didn’t want to deal with drama… I came in my house and pretended I was on the phone to dodge her a bit.  I should have gone to bed early.  damnit.

Then my roommate dropped the bomb the other night she may want to end our roomming situation come August.. she said her and her boyfriend were doing better again and that she might want him to move in.. wants my room for a gaming (table figures like Warhammer) table. Ah the irony.. gamer girl gets brushed off for more gaming… It’s like a sick little sad story.

No time to worry about it now though.  Things are fine currently and that’s stil a ways away.  One thing t focus on at a time… and I think that’s going to be sleep.  More later.