I went to a business meeting at last night in Pasadena. While the restaurant itself was beautiful, I had to chuckle upon entering the bathroom. It was quite a choose your own adventure sort of moment.

Excerpt from my yelp review of the place:
There was one odd thing about this place- the bathrooms. They are single occupancies. The women’s bathroom when you walk in has what I would assume would be a changing table, but it felt like an afterthought. It was more like a table that someone just put a white linen tablecloth over and said oh I’m sure this be smiled upon.

The toilet itself though is where it reminded me of a Halloween episode of the Simpsons. You know, that one where theres a lever that says to go down the crypt or the super fun happy slide.

It was a very deep toilet that atop had 2 buttons- push this for a small flush, push this for a large flush. Suddenly I am a toddler again. I did my business and pressed the small button. As I was about to leave I looked back and was compelled to push the large button. I noticed no difference in the flushes. But who knows… maybe there is something going on in there that I don’t know about. All I know was there were no secret doors to bring me to merriment visa vi of a super fun happy slide nor were there mercenaries to take me to my untimely grave nor did I melt away from picking the wrong grail.

Dear Cafe Bizou, I realize that you are trying hard to impress me, but that last move was just cheap. 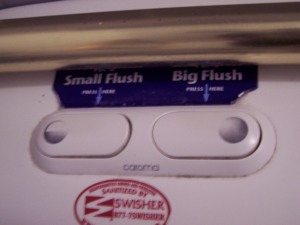 I’ve always been a little off.  This idea has been something that has actually done by my family at one point, but for a reason that wasn’t art.

The picture seen here is from Swedish Artist Eric Ericson.  He spent many years sending objects through the mail and these are a few of them.  I have every intention of copying it.  My mother does not know it yet, but she is about to get sent random miscellaneous objects from me.  So if anyone reading finds something quirky that they want me to mail (within reason), I will send it to my mother.  And when I say within reason, I’m talking stuff that she will likely just laugh at as opposed to something I will get a lecture about.  As it is I’m sure she’s going to mail me a list to therapists in the area and tell me to seek help after this.

I called my grandmother this morning and told her about it.  She is doing much better.  She told me she’d received the postcards I’d sent her and asked me about my weekend.  She was more curious about the things I was doing.  She told me many tales about her life.  We talked a little bit about the hospital and then I mentioned this.

My friend the dark prince said he will help me in the experiment if I want to send him things.  The project is for art as well as humor.

My grandmother reminded me of the time my grandfather did this.  He is far from being an artist though.

In a box somewhere is the muffler from my dad’s old Seabring convertible.  My dad was moving back to California from IL and wanted to try and get a trailer hitch on the back.  Grandpa’s brilliant idea was to saw off the muffler- which he did- take a permanent marker to it and some stamps and mail it to my dad’s new address in California.

It did indeed get there and has been a family joke for nearly 10 years now.

Seeing this post made me smile and so did my grandmother.  I told her I was going to send various objects to my mother and not tell her beforehand.  My grandmother didn’t help.  She actually encouraged the project.

“I found one of your shoes here.  Just one.  You should send it to him or your mother.” she said with a giggle.

“Some black and white one.”

I told her some of the things I planned on sending my mother already.  Just miscellaneous crap that’s around the apartment that I really have no clue why it’s there.  I told my roommate to let me know what he finds while he’s cleaning to send to mom.

“I may be little but I’m odd.” I quoted Eddie Munster.

“I know.” he said and chuckled.

And now my postman is going to know too.  Yay!

Epilogue 2: I’m going to see if I can actually tape some of this but will need a partner in crime and would prefer not to do it at the post office near me as I’m there twice a week as it is already.  If you are interested in being said counterpart please send me an email to inquire about this position or I may just post it on Craigslist.

Upon recently hearing about the 140 conference in New York next month, I was disappointed that I didn’t know about it sooner. I was talking to my friend Rachael (the other half of this video @1indienation on Twitter) who is one of the characters attending, and she told me I should go.

For those of you that don’t know what exactly it is, here’s a little bit about it taken directly from @jeffpulver ‘s site dedicated exclusively to the contest.

The 140 Character Conference (#140conf) will be taking place at New World Stages in New York City on June 16/17. Since announcing this conference, I continue to be humbled by the people who have come forward to be a part of it. I thank the worldwide twitter community for their interest and continued support. (Feel free to follow @140conf on twitter for updates)

While the original scope of the event was to explore “the effects of twitter on: Celebrity, “The Media”, Advertising and (maybe) Politics”, the scope of the event has expanded and we will be covering these topics and a lot more. #140conf will be taking a look at twitter as a platform and will be taking a look at some of the industries which have been disrupted by the advent of twitter.

The schedule reflects the great variety of the subject areas we will be exploring and discussing at #140conf. The speakers represent a “cast of characters” whose presence will help define this event. Our cast members are flying in from around the world to join us. And while not all members of the cast will have formal speaking roles, many will and their presence will be felt at the event. The cast members joining us will be coming from as far as away as: Perth, Australia and Doha, Qatar as well as from across North America, Europe and the Middle East. This will be a gathering of people with a variety of backgrounds and the one thing everyone who will be there has in common is twitter.

The schedule for this two day event will be unique and fast paced. It is my intention to provide a platform for as many people as possible to share their thoughts and engage in conversation with the attending delegates.

However, I am one of the many sacrificial lambs left wayside in our wonderful economic wake. While I’ve had some freelance work in the interim of that happening (by the way if anyone is looking for a copywriter or a personal assistant in Los Angeles- or anything that can be done remotely if not in LA, please by all means email me), I personally can’t afford the trip to go, let alone the conference and the rest of the sh’bang.

And so, a small video project came about. A day trip adventure to the promenade in Santa Monica, talking to random unusual strangers, toys, balloon animals, friendship, and, of course, foul language. This was just one day with me… and for anyone that reads my twitter stream, or either of my blogs, I am confident that I am indeed a character. I’m a whimsical and seemingly carefree, enigmatic woman fresh to the space and ready to make my mark.

I aspire to make the in person connections with as many as possible.

Life is all about the experiences and the people in your life that add to them.  I know New York would be something memorable.  So please, take a look, laugh a little, vote, and then twitter “send @scandalous to the #140conf !”