Day 2 of moving back to Culver City and, of course it rained.  My bike went to the Dr. yesterday. Kage’s heart seized and was diagnosed in need of repair.  Months after my entrance and now exit from the magical land I lived in on the East side… it was a bit of an eye opener.  My last day at the Lake was bright and sunny.  But the day that the move was ultimately being done was a sign that the illusion wasn’t built to last.

Tragedies happened this Christmas and things have tended to break around me.

I work temporary gigs.  Contractor assignments.  Freelance is great and then it’s not enough.  I’ve been working my ass off here to stay in Los Angeles… to get that view of downtown from my balcony in Silver Lake.  For the opportunity to ride my scooter alongside the ocean.  But at the end of the day I’m back where I started this journey- with my stuff shoved in a storage unit and only a few coins left in my pocket.

And then a package came from a ghost. A few months ago my grandfather on my mother’s side passed.  He was a bit of a tinker (he fixed watches in his spare time while my grandmother worked on jewelry) and collected miscellaneous things.  Growing up, he always had a sea of change.  He accrued it from many a travel… Whether it was a trip to the grocery store or running an errand, he’d take the spare change he had and throw it in a drawer.  One thing I remember about him was that he always would have coins.

When the grandkids would visit he would dump a drawer of it out for us.  We didn’t know it in those days but he didn’t have much of anything really.   But back then, we thought he had a million dollars with all the sea of glittering coins lying in that pile.

On Christmas this year I got a package from my grandmother on my mother’s side.  It didn’t look like anything out of the ordinary so I didn’t open it. 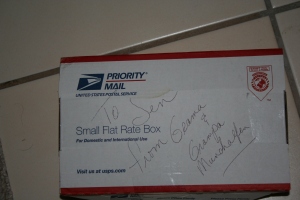 I spent the time with my son.  He asked me what was in the box and I replied:

I didn’t realize it then but inside was something important.

The rain kept coming down.  And the harder it poured, the more I pushed through the storms of it all.  Just like I always have.  And as the rains washed the city and turned my car into something rivaling Swamp Thing, perhaps something happened to me too.

I got the call about the bike this afternoon.  Not good.  I told the mechanic about my other grandfather who is still very much alive and still riding his own motorcycle.  I thought about how much I wanted to fix things here myself.  The video game industry is not exactly a user friendly environment as per stability.

My great aunt Louise passed away this week at the age of 91.  I thought about my grandparents and about my other family back in suburbia Illinois.

I thought about how much my family meant to me.  How I haven’t been home much since I left except for funerals.  About the unsent card I found addressed to the grandfather that died when I came back from going home the last time.  About how I didn’t have the funds to go home for this one.  All that fighting and nothing but pocket change to show for it.

My mother called me to talk about things back there.  She asked if I had opened the package from her mother.  She told me that there was something important in it.

On Christmas this year I got a package from my grandmother on my mother’s side with a simple note:

“Grandma wanted everyone to get a little something from Grandpa.  So she separated the coins and by the grace of Grandpa put them into bags so each of you can start your own coin collections.”

Hmm.  Alright Grandpas, I get it.

The answer was so simple but I was too caught up in everything else that I lost sight of it.

My grandfather may not have been a rich man by a financial standpoint, but he was rich in heart.

It’s not always easy but the dream is attainable.  Everything is all within your reach.  You just have to open your eyes and embrace the change in your pockets.

The arguments were entered that marketing as a whole was a lot of superficial smoke and mirrors and very little to do about content.  Social media, video games… the entertainment industry as a whole.  Is it just a get rich scheme to line the pockets of a few individuals?

Well, the honest answer.. to a degree is yes.  Look at those even semi successful within those realms.  Take a step back and look at a big portion of corporate America.  The rich get richer, and the rats scurry to try for their leftovers.  Then there’s the copycats and sycophants.  Its a race to try and push your way up front.  Maybe Candy Mountain is at the top. At which point, I’d have to say.. move over I want some fairy floss and Snow caps please. Nom nom nom.

I want to believe that there are genuine people in the corporate and entertainment sectors.  And while social media may very well have many of the same components attributed to marketing callousness, I think it’s a step in the direction of forcing people to be more genuine.

I have had a love affair with these industries for years now.  I get defensive when they are bashed.  I do not disagree that there are many negatives and potential for failure.  Humanism sets in, and I think that’s the main reason I get upset.

The reason why stereotypes even exist, is because at the base of them, lies truth.  Truth is not a pretty picture.  But there comes a point where you need to buck up and accept that and/or make steps toward a proactive change.

Things I have found that I want to attain:

I have found that these things have their place in todays society.  However change starts within.  With one person.  There is opportunity out there.  We can always be better than what we are.

I think there needs to be some major revamping to the images our industries are projecting.  I think that dividends will still come, and even more so, when paired with authenticity.  Additionally, I think the general quality of content many places are providing is considerably under par.  There needs to be more attention to this aspect, and less about just the marketing.  Marketing attracts clients, content retains them.

The power of social media is there.. I firmly believe that it has not reached its potential.  We, as a collective should focus and brainstorm more about that.  And thereby, once we’ve reached realization, ascertain it to be a solid actualization.

“All men dream… but not equally.

They who dream by night in the dusty recesses of their minds wake in the day to find that it is vanity; but the dreamers of the day are dangerous men, for they act their dream with open eyes, to make it possible.” —T.E. Lawrence

Someone asked me how many social networks I belong to. I said, way too many. I have a circuit that I go on daily. It’s becoming a shorter list, minus blogs (which that is getting bigger by the day.)

There’s little difference between networks out out there. There were some innovative little ideas here and there, but those niche sites only seem to garner enough attention to substantiate for an ADD child.

I am forever thankful for the people that I have met though. There is no way possible I would have come in contact with such a base spread out as even the tiny portion of what I have.

Friendfeed’s condensed RSS has been a godsent for weeding through the junk sites. I can see the majority of interesting content from my peers and through my peers peers. I learn. I grow. I develop new ideas and am inspired.

What’d I’d really like to see is something actually different come out of the social sphere. Many of the applications are essentially the same derivative package, reformatted and choked back up again. Aggregated RSS’ers, clones, a mess of additional applications to clutter and take away from the basic functionality.

I thought that the principle of social networking was to mainstream more effective means of communication. I think we are getting there. But it’s still a lot of tape and airport signals.. go this way, go that way.

And, although social media is becoming more and more mainstream, there are still many left out. Quite frankly, as user friendly as it seems, it really isn’t. I can’t even begin to tell you how many people have turned their heads and went “Um what’s a twitter?” “What’s social capital?” It’s why sites like myspace still thrive.

For many immersed in it, some of these sites really are laughable. We go to the new ones and gladly hunt invites not necessarily for what’s on there, but to be trendy and one up that schmuck who doesn’t have an “in” on the newest party favor. (I have some brightkite invites left btw, if you want one just message me)

I love social media. I am admittedly an addict. Like a true “drug addict” though, I want more.